From the home inspector’s standpoint, any conditions related to the basic construction of a home are generally either related to the manner in which the structure was originally constructed, or to alterations which have been made to the structure. Typically, such alterations are associated with remodels or additions that are performed some time down the road after the original construction is complete. It remains a very common occurrence for a home inspector to identify issues with such later modifications, especially when a building permit was not obtained by the person who performed the work. However, there are times where structural alterations were made at the time of original construction that may remain unnoticed until several years later:

In the picture to the left, one can see clearly that the toilet is leaning noticeably to the right. The counter top is also sloped downward toward the toilet. While not visible in the picture, the countertop is actually separating from the wall at the back splash. There is a considerable amount of flex and bounciness in the floor and the toilet even shakes when someone walks into the bathroom. If the condition is not identified and corrected further damages may occur. At a minimum, there is a risk the toilet could loose its seal and begin to leak, causing decay to the flooring beneath. It is also possible the sink plumbing could come loose and start to leak. 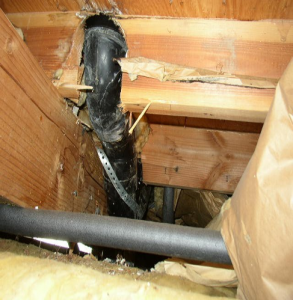 In the picture on the right, taken from the crawl space underneath the bathroom, the cause becomes clear: Because of the layout of the substructure framing, there was no room to accommodate the drain pipes from the toilet when the structure was built. (The toilet drain line is the large black pipe at the top of the picture which you can see going upwards through the plywood sub floor. The base of the toilet is immediately above it). The resolution to the dilemma, which appears to go back to the time of original construction, was to cut the floor joists completely through so that there was room for the pipes. As the over-cut floor joists simply could not provide adequate support, the cumulative weight load from above caused them to sag downward over time resulting in a weak,