A wise friend and fellow inspector has been known to say there are three things which will ruin a home, water, water and water. It is water that causes wood rot decay, water that creates a conducive condition for many wood destroying insects and water that creates the environment in which toxic molds flourish. Our struggle to prevent water intrusion into the structure is certainly nothing new and continues on today even though we have gained greater understandings and made many advances in building technology.

Paramount in this effort to protect our homes from water intrusion are flashings, or specially constructed water resisting details that are used where materials intersect or connect, for example where a chimney penetrates a roof. In looking at the exterior siding, what makes the use of flashing so critical is the fact that the siding is actually not designed to be waterproof, but rather, meant to shed water. With that in mind, anything which creates a barrier to the water shedding capability of the siding can and often does lead to water related conditions such as decay and infestation.

Where horizontal surfaces meet, flashings are necessary if water is to properly shed away. One of the most common findings during a home inspection is a deck which lacks flashing where it meets the siding. Depending on how the deck was constructed and what type of siding is present it may not be so much a matter of “if” the siding and deck will decay, but when. 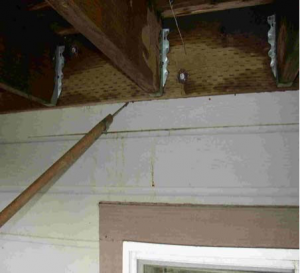 In the first picture, a wood deck has been attached directly to composite wood siding without the benefit of flashing. The attachment point, called a ledger board, is pressure treated and while visibly wet, is still intact. The composite wood siding did not fare as well and the probe easily penetrated the siding’s surface even into the framing material of the wall. Water stains visible on the wall beneath the probe indicate that water had actually been leaking behind the siding and it was later determined the water was penetrating into the wall cavity itself. The damage is this case involved wall framing as well as 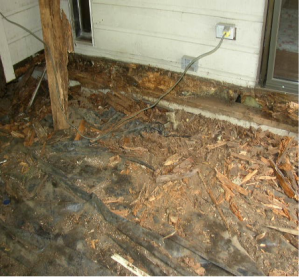 In the next picture the lack of flashing caused extensive damage to the structure including the siding, the rim joist and the ends of the floor joists. Moisture ants, which colonize decaying wood to feed on fungus, had been active throughout as were Dampwood Termites. The cost just to repair just the structure alone not including the deck was nearly $3000.00