Plumbing leaks from failed supply line fittings, old faucets and loose or damaged drain lines are one of the more common findings during an inspection. Leaks are often insidious, slow or even intermittent, escaping the attention of most homeowners until either discovered during an inspection or just noticed by chance. Many of these leaks occur under kitchen sinks where pipes and drains are subject to mechanical damage from garbage cans, soap boxes, or other stored items which we constantly move in and out of the cabinet. And because most people don’t routinely inspect the space beneath their sink these same items can obscure the very leak they caused.

Another area where leaks may go undetected is the laundry room. The simple fact is that these leaks can be very difficult to see. Between the appliances themselves, the ever-present pile of clothes waiting to be folded and all those lost socks on the floor behind the dryer, laundry room leaks can be easily missed, not only by the homeowner, but by the home inspector as well. 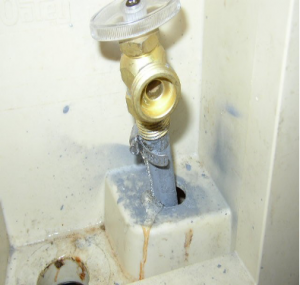 In the first photo, there is an active leak from the washing machine supply line which in this case was easily seen because all of the appliances were gone. The presence of the pipe clamp indicates someone had tried to fix the leak at some time, obviously to no avail. This particular type of supply pipe, called Polybutylene, or PB, is known for having leaks at the fittings, which would seem the obvious case here. (PB pipe was also the subject of a $950 million class action settlement which may offer relief to homeowners who have this type of pipe. Further information is available 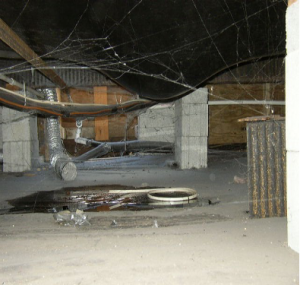 The second photograph shows the view from beneath the laundry room. Because the structure is a manufactured home, there is a plastic belly wrap or barrier all along the bottom of the structure. In the top of the photo this plastic barrier has filled with water from the leak essentially creating a huge water balloon about four feet across. The water is leaking out onto the ground, but a significant amount still remains trapped between the plastic and the floor above. Repairing the leak is just the beginning as the plastic belly wrap will also need to be opened up for evaluation. The sub-floor insulation will clearly need to be replaced, but there may also be hidden conditions beyond that: Among these could be wood rot to the sub-floor or floor joists, infestation of wood destroying insects and even mold. All from one leaking pipe.