There are a number of species of beetles which are known to attack wood, although for the home inspector wood damage from the ominously named deathwatch beetle (family Anobiidae) is probably the most commonly seen. Those in the construction trades and Real Estate community have likely heard of these beetles referred to as powderpost beetles, although that name is technically not correct. Anobiids generally infest softwoods such as douglas fir, hemlock and cedar where the adults lay their eggs in cracks or defects in the wood. Hatched larvae will burrow into the wood and feed for a half a dozen years or more before they work their way to the surface, finally transforming and emerging as adult beetles. The beetles are tiny, about 1/8 inch long and most inspectors will go their entire career without ever seeing one in the field.

Older homes, particularly those which were built with non-kiln dried lumber, top the list of the most common places to find these beetles. In some established neighborhoods virtually every home has evidence of deathwatch beetles either active or old. Newer homes are not necessarily exempt and in one case a new home acquired beetles from 100 year old barn wood timbers which were used inside the home. Unfortunately, nobody recognized the old timbers were infested.

The first photo shows a beam in a sub-structure crawl space which is manifesting a very substantial infestation of deathwatch beetles. The beam is literally riddled with small bird-shot sized holes that have fine powdery wood sawdust or frass coming out of them. Seeing this frass in and beneath the small emergence holes indicates this is a very active infestation. 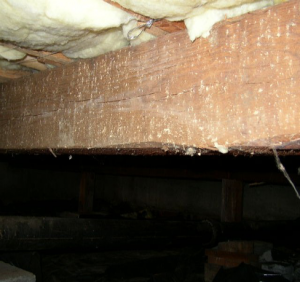 In the second photo, the damage is clear as the rock pick easily breaks through and stays imbedded in the beam. Much of the wood has been reduced to fine powder and the beam will need to be replaced. It is also important when performing repairs that if any damaged wood needs repaired, it should be removed completely. The practice of installing new wood adjacent to damaged wood (called crippling or sistering) is not a good practice when dealing with these types of beetles as

they may then re-infest and damage the newly installed wood. 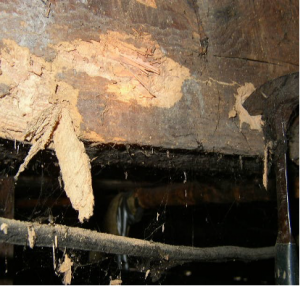 Because these beetles also require moisture to survive, it is important to make sure the sub- structure crawl space is adequately covered with plastic vapor barrier and that there is adequate crawl space ventilation. Foundation vents should never, ever be plugged or blocked. Lastly, in the case outlined here, a licensed applicator was called to provide chemical treatment.